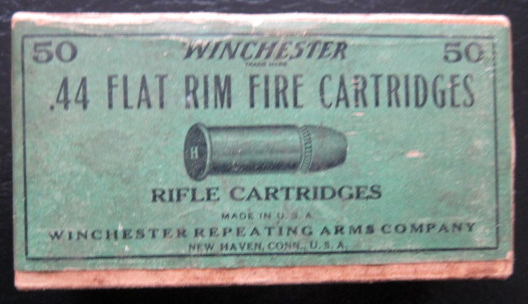 The box has been OPENED and contains all 50 original cartridges. Most noteworthy, they are all in original, un-cleaned condition. Furthermore, the cartridges all have the “H” head stamp.

The overall condition is EXCELLENT.  First, the lid shows no damage and is complete with both end labels present. Second, the box is solid with no broken seams.  In addition, the guarantee label on the bottom is good. Although, there are two pencil/pen numbers written on the bottom??? 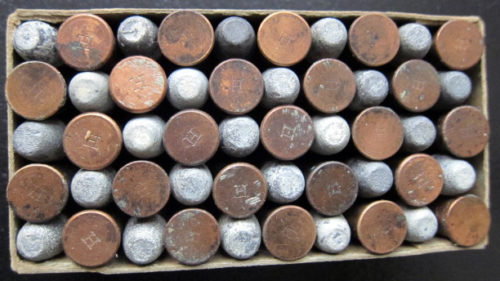 This ammo was the last style of the .44 Flat R. F. cartridge box that Winchester produced up into the early 20th century.

History of the 44 Henry Rimfire Ammo

One of the great reasons for the ultimate success of the Henry rifle, most notably the Henry Model 1860 repeating rifle, was the self-contained metallic .44 Henry cartridge.

In 1854, the Smith & Wesson Company had patented a lever action pistol using a toggle action and an integral front-loading magazine.  Unfortunately, the “rocket ball” ammunition used with this design left much to be desired.  Despite the limitations of rocket ball ammunition, the rocket ball was used in a number of attempts at making a commercially successful firearm.   As a result, this lead to the reorganization and creation of the Volcanic Repeating Arms Company.

During this Smith & Wesson reorganization, Oliver Winchester became a major stockholder, eventually controlling the Company.  Subsequently, Winchester hired B. Tyler Henry to improve the Volcanic design.  B. Tyler Henry went one step further by improving the cartridge.  He invented a copper cased self-contained cartridge which made the bullets more reliable. Accordingly, the .44 caliber rimfire cartridge was born. With his new metallic cartridge and S & W’s lever action design, he developed the Henry Rifle.  Thus, the henry rifle, using the .44 rimfire cartridge, was the first reliable lever action rifle.

Otherwise known as the 1866 “Yellowboy“, the improved Henry rifle was also chambered for the 44 Henry Rimfire cartridge.

Covered with plastic wrap for protection.

Note:  If you are looking for .44 Henry ammo, single cartridges, we do have a limited selection of rim fire and central fire (.44 S&W American) available for purchase.  Please contact us for selection and pricing.