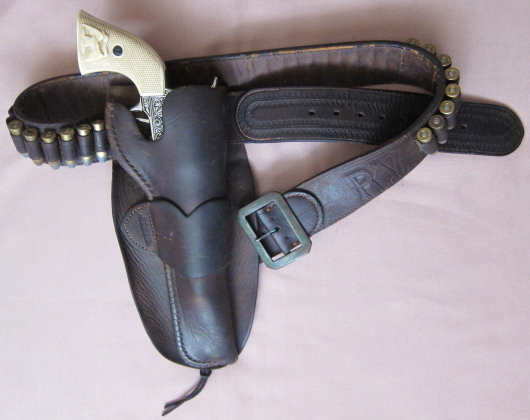 The belt is 36” long x 2” wide and has fifty (50) .44/.45 caliber bullet loops. It has a sewn on tongue and buckle chape with the original, oxidized, buckle. It is fully lined, been oiled, and is in very good overall condition retaining all the original stitching. 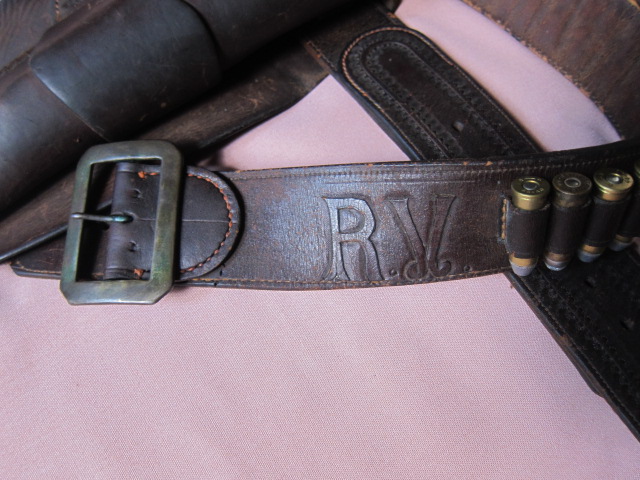 The holster is a plain, single loop holster with heavy rawhide lacing on the pouch. It’s in perfect condition with no damage what-so-ever. It shows a dark brown color, matching the belt, and also oiled a long ago. It is marked “Hamley & Co. Pendleton, Ore” on the side of the loop. Hamley was first established in 1883 in Ashton, South Dakota, moving to Kendrick, Idaho three years later. They relocated to Pendleton, Oregon in 1905 and they became known throughout the West as “the finest saddles a man could ride”. Hamley was instrumental in organizing the first Pendleton Roundup in 1910. The business was sold several times after 1980, and was re-opened in 2005 – still in its original building. 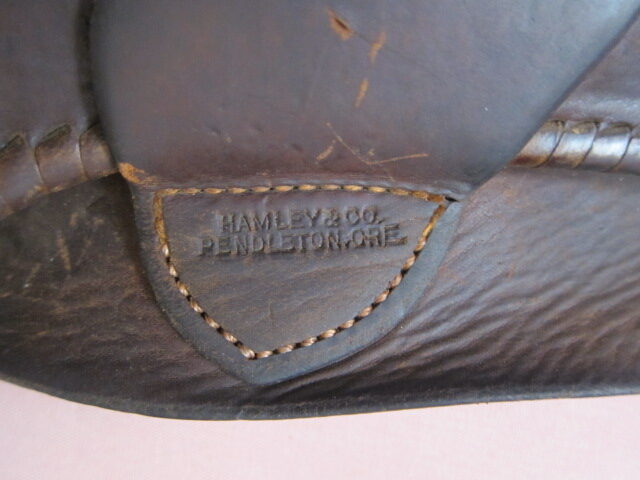 Los Rancheros’ Vistadores (The Visiting Ranchers) was a prominent social club devoted to ranching and horsemanship. It was started in Santa Barbara, California in 1930. The club numbers almost 700 members today and is international in scope. Throughout the years the rides have seen the likes of the rich and famous such as Walt Disney, Clark Gable and Ronald Reagan, to name a few. Every spring, the Rancheros’ mount up for their traditional trek through the Santa Ynez Valley of California for several days, as they have been doing since 1930.

An interesting piece of nostalgia and I wonder who it belonged to. I acquired it many years ago at the Santa Barbara Gun Show.

Toy gun and .44-40 cartridges in photos not included.